While far from a household name just yet, Magneto is known as a "mutant terrorist" who preaches a militant dogma for his fellow mutants. He is occasionally brought up by politicians and pundits when they need a "mutant boogeyman" to show off as proof of how "dangerous" mutantkind is. However, Magneto's full power levels, identity, and history remain shrouded in mystery, and he has a significant following in the nascent mutant community.

The boy who would one day become the mutant demagogue known as Magneto was born under the name Max Eisenhardt in Germany during the late 1920's. Needless to say, it was not an easy time to be a Jewish boy growing up in Germany, especially for a bright and athletic boy like Max...drawing attention to yourself was not a good thing for a Jew to do at the time. When the Nazis passed the Nuremberg Laws, Max and his family narrowly escaped being rounded up, and fled to Warsaw, Poland, where they believed they would be safe from Nazi oppression. Sadly, after the Nazis invaded Poland, his family was caught while trying to escape from the Warsaw Ghetto, and the German Army fired upon them with machine guns. Unbeknownst to Max, his mutant power manifested in that moment, deflecting the bullets away from himself, but he was unable to save his mother, father and uncle. To make matters more unfortunate, Max's survival was only the beginning of his suffering, as he was sent to the Auschwitz Concentration Camp.

Heeding the advice that elders had given him to "do whatever it takes to survive" Max became one of the Sonderkommando...the Jewish prisoners who were tasked with assisting in the operation of the Gas Chambers. It was ghastly, soul-draining work, leading fellow Jews to the gas chambers, stripping them of valuables, and even moving the bodies to the crematoriums. Max survived longer than any other Sonderkommando, largely because he showed a strong knack for keeping the ovens working. Max himself fell into despair, and was on the verge of suicide when he spied a new arrival to the camps...a Gypsy girl by the name of Magda. He managed to bribe one of the guards with valuables he'd retrieved from the dead to prevent Magda from being exterminated. Keeping her carefully hidden, Max began formulating a plan to escape.

As the war dragged on, the guards at the camp grew both desperate and sloppy. They stepped up the amount of prisoners being killed but grew more lax in how attentive they were to their duties. Some guards even fled, not wanting to be caught by the Allies and convicted of War Crimes. Some of the prisoners got the idea to stage a revolt, and when it was unleashed, Max made his move, taking Magda and fleeing the camp altogether. By sheer luck and ingenuity...they succeeded (perhaps because there were too few guards to mount an effective search). Ironically, it would only be a few weeks later that Auschwitz would be liberated by the Allies. Max and Magda knew nothing of this, however, and fled into the mountains of Eastern Europe, living in relative isolation for a few years...regaining their strength and health and trying to help each other cope with the horrors they had witnessed. They were married not long after their escape. To avoid detection however, Max began using the name "Magnus" and passed himself off as a Sinte Gypsy like Magda. By the time the war had concluded, Max had no family, immediate or distant, left alive. He was utterly devoted to Magda, and they soon had an infant daughter they named Anya. Magnus decided they should move to the city to find a better means of providing for their new family. Magda disagreed with the idea, but Magnus was able to talk her into it. They were both barely out of their teen years when they came to the Soviet city of Vinnitsa, and to a less-than-warm welcome.

Magnus did manage to find work within the city, but soon ran afoul of one of his supervisors, who continually tried to cheat him out of his full earnings. Eventually, Magnus had been pushed far enough, and consciously manifested his mutant powers for the first time, hurling a crowbar towards the supervisor. Stunned by his new found abilities, Magnus fled towards the inn where Magda and Anya were staying, only to find it on fire. Magnus attempted to use his abilities to save Anya, but some who had witnessed his attack on his supervisor had summoned members of the KGB, who brutally beat Magnus, rendering him unable to help Anya, who fell from the second story of the inn, already burning and died before her father's eyes. In his rage and grief, Magnus unleashed a powerful blast of infrared radiation that every person in the surrounding several blocks save for Magda. Magda was horrified by Magnus' abilities, and cursed him as a monster while fleeing from him in terror, despite his earnest pleas to help bury their daughter. Magnus of course fled Vinnitsa almost immediately afterwards, and began to search in vain for Magda. Along the way, he utilized the services of a master forger to craft a new identity for himself: That of Erik Lensherr, Sinte Gypsy. The identity was put in place to help him avoid the KGB, and make the search for Magda easier. Sadly, he never found her, and never knew that when she fled, she was pregnant with twins. 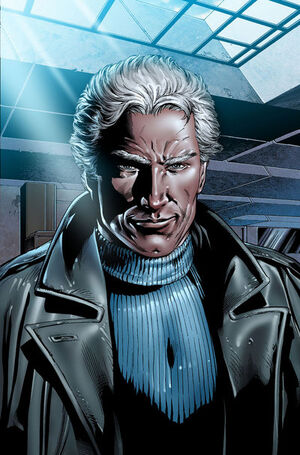 After a few years of vain searching for Magda (who died shortly after giving birth to twin children, Wanda and Pietro), Erik made his way to the nation of Israel, where he found work assisting other survivors of the Holocaust who were more psychologically damaged than he was. He also began educating himself in the use of his mutant powers, as well as many other subjects. He soon found he not only had vast potential, but also that he had an equally vast capacity for learning. Still, he remained unaware of what exactly he was, and how his abilities came to be...until he met Charles Xavier. Charles was another aid worker who was already gaining renown for his success in treating the most "damaged" patients. He and Erik struck up a fast friendship, finding in each other an intellectual equal. Eventually, they also revealed to each other their mutant powers. Charles was the first to tell Erik of what exactly he was...a mutant, and one of the most powerful on the planet, much like Charles himself. The pair spent many months debating and philosophizing about the nature of their existence and quite simply what it all meant. Charles was the eternal optimist, dreaming of a day when these mutants would be accepted by humanity and live with them in peaceful coexistence, but even in those days Erik's own beliefs were far more cynical...he believed that the mutants would have to protect themselves from humanity, who would only fear them.

After many months of camaraderie, Charles and Erik eventually parted ways for a time. Both turning to wandering the world, albeit for different purposes. Charles was wandering to further the pursuit of his dream. Erik had not yet fully formed his own path, and instead began working as a hunter of Nazi war criminals. He proved quite adept at the role, capturing many and turning them over to Israel to be judged. Along the way, however, he also found many troves of hidden Nazi gold...gold that had been plundered from the victims of the Nazis. Gold he took for himself, vowing that the sacrifice of those that it had been stolen from in the first place would not be in vain, but rather that this might one day help preserve a different people from the same fate. He continued his education and training himself in the use of his powers, as well. So it continued for several years until Erik received a message from his old friend Charles, asking him to join him at his estate in Westchester, New York.

Erik joined Charles Xavier at his estate, where Charles outlined his ideas for a special school to teach young mutants how to safely harness their abilities. Mutants that would then use those abilities to help mankind and foster peace and understanding between man and mutant. Erik remained skeptical that such a thing would ever occur, but out of friendship, and perhaps out of the last embers of hope remaining in him, Erik helped Charles design the early stages of what would become his School for Gifted Youngsters, and more so he was instrumental in the design and initial building of Xavier's mutant-detecting machine, Cerebro. During this time he also came into the acquaintance of one Amelia Voght, who was Xavier's lover at the time, and had a dalliance with a woman who would later give birth to one Lorna Dane. Unfortunately, as time passed, Erik grew more and more cynical about Charles' chances for success. As more mutants began to emerge and humanity began reacting to them in exactly the way he expected, Erik began to feel that something more drastic would need to be done to protect the mutant species. He parted ways with Xavier once more, wishing him well, but unable to find enough faith in Charles' vision to sustain him.

Still, Erik was not yet sure how best to go about protecting mutantkind. He fell back into old habits, hunting Nazi war criminals yet again, this time in conjunction with the CIA, under the code-name "Magneto." He also met and fell in love with a human woman named Isabelle. Unfortunately, his CIA "handler" eventually turned on him, and murdered Isabelle. Enraged, Magneto rejected humanity entirely, and after erasing the records of his work with the CIA, he fled once more, and began to formulate a plan for a mutant "army" of his own. He built hidden safe houses in various corners of the world, and after building mutant-detection devices of his own, he began looking for recruits. Among the first he encountered was the shapeshifter known as Mystique. Impressed with her resourcefulness and experience, he offered her the position of his second. The offer accepted, they set to finding others to bring to their cause. Erik reached out to Amelia Voght, who had grown estranged from Xavier and embittered towards humanity, accepting her as a "voice of reason" that could sometimes temper Magneto and Mystique's more violent and militant sides...sometimes. Magneto also rescued a pair of mutant twins from an angry mob, and was soon shocked to discover that this "Wanda and Pietro Maximoff" were in fact his long-lost children...children he didn't even know he had. As others were brought into the fold, Magneto dubbed his organization the "Brotherhood of Mutants" and soon developed a reputation within the "underground" mutant community as a potential leader, and a voice in favor of mutant superiority. This philosophy struck a chord with many embittered and angry young mutants, and before long the ranks of the Brotherhood began to swell.

It would only be a short time until the Brotherhood started conducting "terrorist" raids, usually to secure resources vital to the "cause" and usually not so public and flashy as to attract a huge amount of attention...but certainly enough to put the Brotherhood "on the radar" of the governments of the world. They also began to come into conflict with Xavier's own group of mutants, the X-Men, who often managed to prevent the Brotherhood from succeeding in their tasks. Still, the Brotherhood continued to grow, and Magneto continued to plot, dreaming of the day when mutants would take their rightful place as "inheritors of the Earth."

Log(s) happened before the revamp and may not apply in full:

Retrieved from "https://comicadventures.fandom.com/wiki/Magneto?oldid=25867"
Community content is available under CC-BY-SA unless otherwise noted.